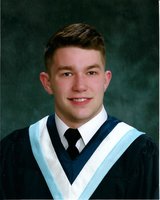 On October 29th, 2019 the Lord came and took our earth angel back to heaven. We will miss him forever.

Liam graduated from NNEC in 2019. He will always be remembered for his love of sport and his competetive spirit. He gave everything he had playing for the NNEC Rugby Team and his beloved Golden Hawks. Liam had many friends and touched the lives of many people.

Until we see you again...Good Night Sweet Prince.

We know that Grandmas Carol and Bernadette are waiting for you.

Donations in his memory may be made to a charity of your choice. www.mclarenfuneral.ca