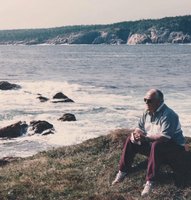 Our family is sad to announce the passing of Tom Cheverie in New Glasgow on November 26th, 2019 at the age of 82.  Tom was born in Pictou, Nova Scotia on May 7th, 1937 and was raised in ‘the Valley’ of Pictou which he would often speak fondly about.  Tom will be remembered for his generosity, passionate personality and love he had for his family.  He spent the later years of his life in Pictou driving around enjoying his Timmies coffee, telling ‘olden day’ stories to his children and grandchildren and flying online with his friends from all over the world.  He always enjoyed an adventure and lived by the rule of giving what you can when you can.  Tom will be remembered by his brother, Roy Cheverie (Jane); children, Glenn Cheverie (Sue), Cheryl Cheverie, Heather Cheverie-Mattie; grandchildren, Elisha Martynuik (Jarret), Caitlyn Cheverie (Mike), Ashley Cheverie (Travis), Paige Mattie; his great-grandchildren, Marshal Martynuik, Ezekiel Bratt, Westley Martynuik.  As well as the many family and friends that were a part of his life.  Tom was predeceased by his loving wife, Maire (MacDonald) Cheverie; siblings, Shirley Mills (Robert), Billy Cheverie (Tora). A celebration of life will take place at a later date. Donations in Tom’s memory can be made to Hope for Wildlife.