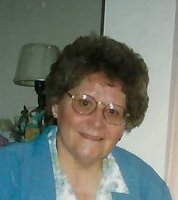 Laura Agnes (Roberts) Langille -85, of Haliburton, passed away on December 18, 2019 in the Aberdeen Hospital, New Glasgow. Born in Westerly, Laura was proud of her Cape John roots. Over the course of her work career she held many positions, housekeeper, babysitter, cooks assistant, fish plant floor worker and later office time keeper, sales clerk ending her career at 55 to remarry and travel with her husband, Art. She enjoyed singing in church choirs and knitting which she continued until recently. She was tickled to be part of a documentary about her early days at the fish factory, but most proud of her GED certificate. Laura is survived by daughter, Marg (Dave) MacLeod; step-daughters, Nancy (Jim) MacLeod, Sharon (Wayne) Langille, Sheila Langille; step-sons, Brad (Wendy) Langille, Darren (Tammy) Langille; sisters, Mattie Dwyer, Rhetta Murphy; brothers, Jerry and Everett (Erma) Roberts; Many nieces, nephews, grandchildren and great-grandchildren. She was known as Nanny Laura to many. She was predeceased by her parents, Mary (Robison) and Robert Roberts; husbands, Al-Howes Langille and Art Langille; sister, Dorothy Cameron; step-sons, Ted (Donna) and Geoff Langille. Many thanks to the men and women of 4 medical who cared for her. Also thank you to VON for TLC and support. Donations in Laura’s memory may be made to the SPCA of which she was a strong supporter. A public graveside service will take place Friday, December 27th at 2PM in Hamilton Cemetery, River John, with a reception to follow at St. George’s Church Hall, River John. www.mclarenfuneral.ca