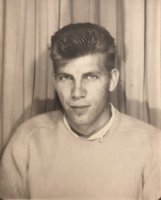 SKRYNSKY, W. M. P. ‘Bill’ Pictou William Michael Peter Skrynsky, ‘Bill’, aged 76, passed away peacefully on January 15th, 2020 in the Halifax Infirmary. Bill was born in Fort Frances, Ontario on January 23rd, 1943 to Peter and Jean Skrenski. He joined the Navy at the age of 18 and proudly served until he met his wife, Marie McLean in Halifax. They were married on July 23, 1966 and had five children. Bill and Marie lived in Toronto while Bill worked as an electrician. The family then moved to Pictou, where he worked for Michelin for 36 years. He travelled all over North America during his time at Michelin, spending time in Kentucky, as well as North and South Carolina; Bill loved the road. He was extremely active in his community, opening a chapter of the Knights of Columbus alongside his good friends, the late George Sellers and Jerry Chaisson. He was President of the Pictou Minor Hockey League, and coached both his son, William, and grandson, Connor in baseball for many years. He was the dedicated director of the Pictou West Food Bank until his death. An avid Liberal throughout his life, Bill served as President of the Pictou West Liberal Association and continued to lend his time and effort to the Liberal Party whenever possible. Bill’s favourite past-times were spending time with his children and grandchildren, making sure everyone who came through the door was well fed, and playing cards with anyone who was willing to stay up into the wee hours of the morning. He is survived by his wife, Marie; his children, Anne (Paul Horncastle), Halifax; Melanie (Mike Cugno), Halifax; Katrina (Russell Briggs), Australia; Nancy (James MacPherson), Australia; William (Rosie), Cardigan; his grandchildren, Hannah, Nova, Isla, Connor, Hailey, Jackson, Rebekah, Hannah and Maxwell; his sisters, Joyce (Andy Preston), Vancouver; and Janet, Oshawa; his younger brother, Johnny (Winnie), Atikokan; his brother in-law, Hal Mclean (Lia), Winnipeg; as well as his beloved and uniquely named pets, Figgles, Squeaks, and Little Kit. Visitation will be held on Tuesday, January 21st from 2-4 and 7-9pm in McLaren Funeral Home, Pictou. A service will be held to honour Bill’s life on Wednesday, January 22nd at 11:00am from Stella Maris Roman Catholic Church, Pictou. Donations in his memory may be made to Pictou West Food Bank, Pictou County SPCA, or the Heart and Stroke Foundation of Canada.