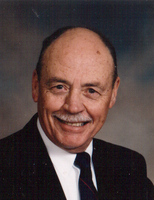 MARSHALL, Robert Lloyd Pictou On this day, morning has broken. February 6, 2020, Bob passed away during a peaceful sunrise. Bob was a son of the late Mary Ruth (Risser) and Robert Jost Marshall, Yarmouth. As a young man, he began work at The Bank of Nova Scotia. In 1953, he was transferred to Charlottetown, PEI, where he began his long successful career. In addition, Bob was appointed as Sub-Lieutenant in the Royal Canadian Navy Reserves. It was here he met his bride, Fay. Sharing the same birthday was just the first dance. Bob and Fay were married in 1955. United in a strong faith and a significant commitment to each other, they guided their family with memories to cherish. Bob’s proudest accomplishment: their three sons. Together, they instilled a lasting legacy that is to be admired; work hard, be honest and be fair. Bob echoed these sentiments in the ongoing mentorship of numerous residents and organizations. Bob invested his time, energy, professionalism and expertise to The Town of Pictou. Benefitting from his passion and connection to his community was Pictou Minor Hockey Association, Sutherland Harris Memorial Hospital, Pictou Academy Educational Foundation and Pictou United Church. These organizations were a highlight in his life; doing for others. As the patriarch of the Marshall family, he will be dearly missed and never forgotten. Besides his parents, he was predeceased by brothers, Laurie and David Marshall. Surviving is his wife of sixty four years, Fay; sons and family, Robert (Frances), Jocelyn (Brandon), Matthew (Harmony); Andrew (Judy), Chloe, Jack; John (Sherry), Emelyne (Matt), Barett (Megan). It should not go unnoticed, Bob’s love of bird hunting, sports, dogs, travel and time spent with family and friends. Robert Lloyd Marshall, a true role model. Visitation will be from 2-4 & 7-9 PM Monday in McLaren Funeral Home, Pictou. Funeral will be held at 11AM Tuesday from the Pictou United Church, with Rev. Mary-Beth Moriarity officiating. In lieu of flowers, donations may be made in memory of Bob to the Pictou United Church or Parkinson’s Atlantic Canada.