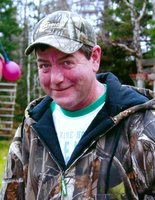 SUTHERLAND, Ronnie Caribou River Ronald “Ronnie” Allan Sutherland -56, of Caribou River, born October 7, 1963 passed away February 19, 2020 in Tatamagouche, NS at the Lillian Fraser Memorial Hospital, after a short battle with cancer. He loved the water from a very young age and was fortunate enough to have owned his own gear from the age of 18. In 2015 his gear was purchased by Chad Sutherland, a cousin whom Ronnie was very fond of, and knew the Caribou Gull was in good hands. Ronnie then moved on to be a fisherman’s helper and worked in Alberta during the winters. He enjoyed hunting and fishing trips with family and friends, as well as tuna fishing with good friend Gary Cameron and fellow fishermen. Along with these trips and experiences came a lot of storytelling, leaving us to wonder which was fact or fiction. Ronnie could often be found in his building or at the camp entertaining his friends with his sense of humor and never missed a gathering at the Sutherland Family Farm. Ronnie is survived by his parents, Gerald and Darrell (Langille) Sutherland, Caribou River; son, Richard “Ricky” Sutherland, Caribou River; brother, Richard Sutherland, Caribou River; sister, Tammie (Terry) Heighton, River John; niece, Emily Heighton; & nephew, Justin Heighton, both of River John; and many aunts, uncles and cousins. He was predeceased by paternal grandparents, Austin & Doris Sutherland and maternal grandparents, Wilson and Myrtle Langille. Visitation will be held at McLaren Funeral Home, Pictou on Saturday, February 22nd from 5-8 pm. Donations in his memory may be made to the Northumberland Fisheries Museum or the Lillian Fraser Memorial Hospital Foundation. No flowers upon request.