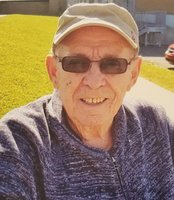 MacKAY, Franklyn Stanley – 83, passed away peacefully April 15, 2020 at the Maritime Oddfellows Home, Pictou. Born on January 30, 1937 in River John he was the son of the late Hector and Jean (Henry) MacKay. Frank is survived by his loving wife of 65 years, Alexina “Jemima”; son, Frank (Trudy); daughters, Jo-Anne, Nancy (Mike) and Darlene (Kevin); his 10 grandchildren; Derrick (Susan), Michael (Nancy), Robert (Jennifer), Bryan (Laura), Chris (Sherri), Trevor, Tanya (Stephen), Bradley (Ashley), Shannon (Matt), Mandy (Thomas), Amanda Cornett and 22 great grandchildren; sister-in-law, Janice; brother-in-law, Colin MacIsaac. He was the last surviving member of his immediate family. Besides his parents he was predeceased by brothers, David, Charles, Gordon, Donnie and John; sister, Louise Tamlyn; son-in-law, Greg McNamara and grandson Kenny McNamara. Frank worked at Murray MacDonald’s garage, Hamilton Biscuit Factory, the Pictou Shipyard and finally retired from the Nova Scotia Department of Fisheries in 2001. He was a member of the Stella Maris Church, Pictou. Frank enjoyed golfing with his buddies, antique cars, western movies and loved sitting outside during the summer months with the love of his life, Jemima. He was a great guitar player (played in numerous bands) and was famous for his ‘oh yas’ during his Friday night rhythm and blues. Frank’s welcoming smile was cherished by many. The family would like to extend a very special thank-you to Dr. Ohson and the staff at the Maritime Oddfellows Home, who lovingly cared for Dad. Their many acts of kindness will always be remembered. Also, special thanks to Vernon Turple (long time friend) for all his visits and drives with Frank over the last few years. Funeral Mass will be held at a later date with burial to follow in Seaview Cemetery. Donations in Frank’s memory may be made to the Alzheimer’s Society or the Pictou West Food Bank. www.mclarenfuneral.ca