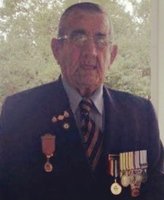 LeBLANC, Walter Dominic - It is with deep sadness and heavy hearts that the family of Walter LeBlanc announces his peaceful passing at home on May 1, 2020 with his loving wife Eileen and family members by his side. Born in Pictou August 11, 1931 he was the youngest son and seventh child born to John Tom & Johanna LeBlanc (White). He is survived by wife, Eileen LeBlanc (Cyr) of 63 years; daughters, Carolyn Zwicker (Richard), Dawn Bray (Allan), MaryAnne LeBlanc, Denise LeBlanc-MacKenzie, Johanna Watters (Dan); sons, Tom LeBlanc (Dee), Michael LeBlanc, Johnny LeBlanc (Nancy); 21 grandchildren; 36 great-grandchildren and 1 great great-grandchild. He is also survived by brothers, Robert LeBlanc (Sharleen), Fred LeBlanc; sister, Irene Poole (Jim); along with several nieces and nephews. He was predeceased by his son, Walter LeBlanc Jr.; grandson, Cameron MacDonald; great-grandchildren, Hank Reid, Robbie Dalton; son-in-law, Brian Zwicker; sisters, Beatrice LeBlanc, Marion Hawes (George), Connie Malley (Ted), Hazel Currie (Joe); sister-in-law, Mary LeBlanc. He was a faithful member of the Stella Maris Roman Catholic Church, Pictou. A Korean War Veteran and a life member of the Royal Canadian Legion branch No. 16 Pictou. In his early life, he was a fisherman, worked on coastal freighters, and worked construction before being hired by the Pictou Maintenance Department where he worked for 34 years prior to his retirement. To family and friends he was known as Dad’s taxi as he would drive us anywhere at any time without question or complaint. Although he didn’t have a nickname, he would often laughingly refer to himself as the Desert Fox or your Handsome Grandfather. Dad was an avid crib player and was often teased by family members that he held the Guinness record for the most times caught cheating, pegging an extra point, to which he would just laugh and say oops bad eyesight. Dad also loved going for drives in the country with mom and participating in his most recent favorite pastime scratching lotto tickets. Dad was an amazing father, grandfather, and was well known as a great joke and storyteller. His many grandchildren were his greatest joy and he spoke of them often to anyone who would listen. Dad was a kind and generous man who was always willing to offer a helping hand or kind word to all; he will be remembered for his great sense of humour, kindness, generosity and love towards family, friends and many acquaintances. Cremation has taken place and due to the current restrictions related to Covid-19 a mass and burial will take place at the Stella Maris Roman Catholic Church at a later date. Donations in Walter’s name can be made to the Heart and Stroke Foundation or to the Stella Maris Building Fund. www.mclarenfuneral.ca