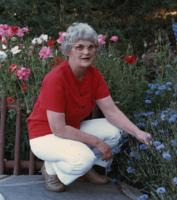 MacNEILL, Katherine ‘Kaye’ T. Pictou Katherine “Kaye” Teresa MacNeill (nee Chisholm), 98, passed peacefully on May 3, 2020 in the Shiretown Nursing Home, Pictou with her youngest daughter at her side. Kaye was born in St. Andrews, Antigonish County on March 24, 1922. She was one of seven children of James R. Chisholm (“Jimmy Colin Jim”) and Mary MacDonald. Kaye was predeceased by Orvis MacNeill, her husband of 37 years. She is survived by daughters: Coleen (Marc Anctil) MacNeill, Trois-Rivières; Lauranne (Henry) Matheson, Ottawa; Elaine (Doug Thompson) MacNeill, Toronto; Maura (Glenn Richard) MacNeill, Dartmouth; Maryanne (Aaron) MacDonald, Pictou; sons: Lee (Joan Brennan) MacNeill, Pictou; Greg (Marjorie McConnell) MacNeill, Wolfville; Colin (Beth Munro) MacNeill, Caribou; Blaise (Karen Langille) MacNeill, Pictou; Michael (Betty Crossman) MacNeill, Dartmouth; and by 19 grandchildren and 12 great-grandchildren. Kaye is also survived by her sister, Theresa (Daniel “Dannie”) MacDonald, Antigonish; and by her sister-in-law, Dorothy (nee Kaszas) Chisholm, Ottawa. She was predeceased by three sisters: Anne (Les) Gardiner, Alberta; Rita (A.J.) Gillis, Pinevale; Mary (Frank) Glenn, Heatherton; two brothers: Colin (Mary Alice) Chisholm, St. Andrews; and Lauchlin (Dorothy) Chisholm, Ottawa. Kaye’s character was formed to a large extent by the loss of both parents in her childhood to tuberculosis. At the age of eight, she moved to her maternal grandparents’ home with two of her siblings, where she formed lasting memories of the hard work involved in subsistence farming. She told stories of her grandfather fashioning his own cartwheels and her grandmother growing, harvesting, spinning, and weaving flax to make a linen tablecloth. Her early loss and her exposure to depression-era rural Nova Scotia, where jobless itinerants were not an uncommon sight, no doubt shaped her life-long compassion for troubled souls. Another legacy of life with her grandparents was a cache of Gaelic expressions (such as strupag for a cup of tea), but, to her regret, she never learned from her elders to speak the language. Kaye excelled in school and went on to obtain a teaching certificate from Truro Normal College. Soon after she began teaching (in a one-room schoolhouse near Heatherton, Antigonish County), she met Orvis, her husband-to-be. When they married the next year, she left her teaching position to take on the role of wife and mother in Pictou, Orvis’s hometown. There they raised their large family, and she returned to full-time teaching after the children were of school age. For many years, she taught students with various special needs at Sir William Dawson School, and her affection for those children was always apparent in the stories she brought home at the time. She retired from teaching in 1987. Kaye read voraciously, recited sentimental poetry by heart, and had the sometimes annoying habit of pointing out the Latin and Greek roots in words. She made sure her children were readers too, regularly carrying stacks of books for everyone to and from the library. When she began to lose her vision, it seemed especially cruel to us that it should happen to such a reader. Two of Kaye’s other passions besides the English language were maps and “the news”. She kept a large collection of National Geographic maps under her bed, and she tracked every movement of family and friends on her Reader’s Digest Atlas. “Turn the news on” was likely her most common expression, and she watched the CBC National News every evening without fail, often with the atlas in front of her for context. She had an intelligent and compassionate opinion on every event of the day, and she maintained an open mind through every cultural shift she witnessed. She also kept up with popular culture and considered it a gift when her children and grandchildren shared the music they were listening to and the books they were reading. Kaye and Orvis shared a love of gardening and would spend long hours tending their flowers and vegetables (or “avoiding housework”, as she put it). She also was, by necessity, a fantastic cook who could feed a crowd in no time with seemingly little effort. Unexpected guests, hungry or not, would immediately be sat down in front of a cup of hot tea and a heap of food pulled from nowhere. Kaye’s strong Catholic faith was a crucial part of her being, and the form it took had a profound influence on even the most skeptical and disillusioned of her children. She believed, as we all continue to do, that every person carries a spirit within them (what she called the Holy Spirit) that must be honored, and that everyone deserves respect and fair treatment, no matter what their race or culture, their station in life, or their religion or lack of it. Of course, she was by no means a saint; she could be wickedly scornful of all types of “scoundrels”, and of certain politicians in particular. What we will treasure most about Kaye’s memory is the force she wielded that has held our large, imperfect, at times quarrelsome family together through many years and that helped her form the extraordinarily strong bonds that exist today among her scattered grandchildren and great-grandchildren. Her family regrets that, because of the restrictions imposed by COVID-19, we are unable to gather with those who knew and loved Kaye. If you have a particular memory of her or an anecdote you would like to share, we would be very grateful if you did so on the tribute wall. The family would like to give special thanks to the staff at Shiretown for their exceptional care and compassion. Funeral arrangements have been entrusted to McLaren Funeral Home, Pictou. Father Peter MacDonald will be offering a private service there with a small number of immediate family on May 7. In lieu of flowers, donations may be made in Kaye’s name to the Stephen Lewis Foundation, Doctors Without Borders (MSF), or the charity of your choice.