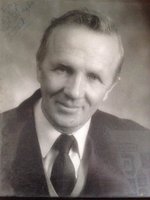 CAMPBELL, C. W. Ian Pictou CAMPBELL, Charles William “Ian” - 80, of Pictou, The navigator has found his way home. Born Oct 1, 1939 in Pictou, Ian died surrounded by the love of his family on May 12, 2020. Among his many talents and accomplishments, Ian excelled in seeing the value and potential in people and things that others overlooked or set aside. He enjoyed listening to good music on vinyl records and was a voracious reader. He loved art, especially paintings and etchings depicting life on the sea, and in his later years transformed his living room into his own special gallery. Ian’s varied careers reflected his smarts, love of learning, and restless spirit. He was a seaman, Red Seal plumber, pipefitter, welder, TV repairman, and real estate agent. He had fond memories of life as a crewman on the CSS Acadia, the E.E. Prince and the CCGS Louis St. Laurent among other vessels. For many years he taught navigation at the Fisheries Training School in Pictou, both onsite and in fishing communities throughout northeastern N.S. and Cape Breton. He took great pride in seeing his former students build successful livelihoods in the fishery. In his semi-retirement years, he worked part time with his friend Donnie Gunning. Ian pursued his love of acting with roles in many local films produced by Iain MacLeod. He also played a Russian Captain during the launch scene in the Hollywood movie, K-19 The Widowmaker. Ian had tremendous pride in his children, grandchildren and great grandchildren. He always reminded them of their special gifts and encouraged them to find their own unique path in life. Ian was predeceased by his wife, Lilla; parents, Alice and Horace Campbell; brother, Eric. He is survived by brother, Sandy (Barb), Pictou; sister, Sheila (Lawrence), Truro; daughters, Sylvia (Dan) White, Catalina NL; Helen (Allan) Murphy, Ottawa; Lisa Marshall (Phil), Stellarton; sons, David (Sue), Waverley; John (Maureen), Greenhill; Peter, Pictou; Allen (Sue), Dartmouth and Jason MacDonald (Karrie), Sunnybrae. His grandchildren, Elizabeth, Katherine and Logan Murphy; Ainslie, Breagh and Mari Campbell; Jarod and Rebecca Campbell; Liam and Zachary Campbell; Honey, Morgan, Devin, Thomas, and Hope Dudka; Elijah and Emma MacDonald; Christopher and Misti-Ann MacDonald; and Megen White brought him great joy, as did his great-grandchildren, Cass, Ira, Chase and Rayne; his nieces, Katie and Maxine and his beloved Maltese, “Lady Bella of Hamilton”. The family would like to thank the Palliative Care team and the VON for their care that allowed him to stay at home. Special thanks to Dr. Ohson, who went above and beyond, and to our angel Arlene who cared for him (and us) in Ian’s last days. Cremation has taken place. Funeral service and burial will take place at a later date. Donations may be made to St. James Anglican Church, Pictou or a charity of your choice. This recording captures Ian’s life story in his own voice. It was recorded in 2019. https://drive.google.com/file/d/1DtaQwAK2Pw8xg2dniqluWtUUo7B7YaSz/view?usp=drivesdk