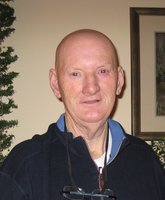 MUISE, John D. “Dougie” February 1, 1939 – July 12, 2020 Mike and Kim Greek with our children, Christy, Joey, Lia and Jessica sadly announce the passing of our dear Uncle Doug. We were blessed to have him with us for 7 years as our children grew up. He moved on to Ivey’s Terrace 4 years ago where he passed away quietly with his trusted and loving Ivey’s family at his side. It is fitting that he was just down the road from his former home. Dougie was born in Inverness, Cape Breton, a son of the late Christina and Archie Muise. He was the youngest child of a large family, predeceased by sisters, Mary Martin, Georgina Langille; brothers, Sandy, Joe, and Ernie. He is survived by brothers, Mattie (Catherine), Stellarton; Donnie (Joan), Pictou; and many nephews, nieces, cousins and friends. He loved to tell stories, good and bad about everyone and everything. He seemed to remember everything, except that he shouldn’t feed the dog under the table, at which point when he was caught, he threw his hands up in the air saying, “I had to”. His compassion and understanding for animals was deep and he related to them better than anyone. When he looked at a picture, an animal was named before any person. He loved Dogs and Cows. Music spoke to him. He had a deep reaction to some, consistently crying at certain songs, like Jingle Bells and Over the Waves. His musical talent was remarkable, he could play the organ, harmonica or ‘mouth organ’, the accordion or ‘cordeen’. His skills knew no boundaries, being able to come home from church and play songs he had only heard once. He would sometimes lose interest in an instrument for a long time and then pick it up again just as he left off, playing like a master, sometimes years later. With people, he was cautious, but he loved his Mumma, women as a rule, especially blonds, and tolerated as needed, men. Universally he liked everyone after they died. Mostly he didn’t like anyone new and didn’t mind insulting people. He loved little boy things, like trucks, cars and trains, his bike and scooter, cheesies and peanut butter. He loved cutting up things with scissors and tape. He would throw away anything to get a new one. In his long life, he had great loss but would adapt very well to change. He always managed to find his place in the new normal. When his adored Mumma died, he looked to ‘Geen’ as his new mother figure and when she couldn’t continue, he accepted Kim as the new mother figure. Everything was filtered through the mother first. He tattled on others to the mothers and sometimes on the mothers. When Georgina ruled out smoking, he stopped, when he lost someone, he moved on. The story of Forrest Gump in the first scene where the feather is blowing in the wind always reminded me of Doug. Life happened to Doug but he found his place each time. Grew where he was planted. Ran when he felt like running, when he was tired, he slept. He didn’t catastrophize, he moved on. We have much to learn from Doug’s example. Now he is in heaven, reunited with his Mumma, riding his bike, laughing until he is weak. I know he is resting in peace – Kim. The family would like to thank the wonderful staff at Ivey’s Terrace Nursing Home in Trenton for their loving care of Doug during his time there. They are a blessing to the residents in their care. Funeral arrangements are under the direction of McLaren Funeral Home, Pictou. A graveside service will be held in Christ the King Cemetery, Trenton, on July 25, 2020 at 2PM with Father Tom MacNeil officiating. Donations in memory of Doug may be made to the family. www.mclarenfuneral.ca