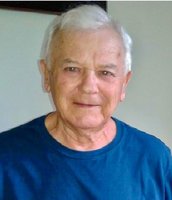 TURPLE, Vernon Sr. Scotsburn TURPLE, Capt. Vernon Elias Sr. - 85, of Scotsburn, passed away peacefully on September 20th, 2020 at home with his family by his side. Born on August 13th, 1935, he was the son of the late Lester Sr. and Helen (Cyr) Turple. Vernon is survived by his wife, Janet (England) Turple; brothers, Leonard, Bay View; Lester, Pictou; sister, Mary, Burnaby; and Emma (Russell) Clarke, Pictou. His children, Vernon Jr. (Darlene), Pictou; Marilyn (Eric) Hemphill, North Carolina; Kevin, Dartmouth; Bonnie (Robert) Turple-Kruemmel, North Carolina; Andrew (Jenna), Saskatchewan; Holly, Scotsburn; and many grand and great-grandchildren. Besides his parents, he was predeceased by his son, Johnny; sister, Janet, and brother, Hugh. Vernon’s love for the ocean began at a young age working as a fisherman on the Northumberland Strait and building boats with his father and brothers in Pictou. He moved on to further his career working on offshore supply vessels and tugboats. He retired from Purvis Marine at age 72. One of his greatest accomplishments was achieving the highest-grade sea farer qualification, Master Mariner. After retirement, Vernon's favorite place to be was at home in Scotsburn with his family. Vernon was a kind, gentle and loving father. He always enjoyed when all of his children would come home and be together for feeds of lobster every year. He could pick up and play any musical instrument and loved to entertain at home, having many kitchen parties with his daughter Holly, brother Leonard, and best friend Frank Mackay Sr. We are all at peace knowing that Vernon/dad is now surrounded by those he loves in heaven. We have no doubt he is having a beverage, singing, and strumming the guitar with Johnny, Frankie and all those he has missed over the years. The Turple family would like to give a heartfelt thank you to Father Peter MacDonald for the many visits and comforting words he provided to Vernon and family. We would also like to thank the Aberdeen Palliative Care and VON nurses and caregivers for giving wonderful care. Cremation has taken place. There will be a graveside service held at Seaview Cemetery at a later date. Any donations, in Vernon’s memory, can be made to the Aberdeen Palliative Care Society and Pictou County VON. www.mclarenfuneral.ca