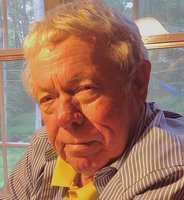 MacDONALD, Alexander Hugh Pictou A lover of gardening, travel and family, Hugh (aka Papa) was born on January 5th, 1943 and passed away the same day of this year. Survived by his daughter, Mirren (Benjamin) Harris, Halifax; son, Malcolm (Catherine) MacDonald, Halifax; brother, Billy (Nova Poirier) MacDonald, Elmfield; nephew, Dillon (Kelly) MacDonald, Spruce Grove, AB; and his five grandchildren, the lights of his life, Alice, Siobahn, Oliver, Mhairi and Anderson, all of Halifax. Hugh was born in New Glasgow and was a son of the late Willard Eugene MacDonald and Dorothy Anna MacKenzie. He was predeceased by his wife, Gardia Joanne Anderson. Hugh was a local Pictou County enthusiast and long-time supporter of small businesses. He was happiest when connecting with the earth, whether planting trees or picking berries, and spent much of the first part of his life travelling the world. An avid reader, Hugh was a local historian who gave extensively to others and always had the time to share his ideas, stories, and opinions whether in person or over the phone. He held family and tradition close to his heart and passed his love of gardening, travel and reading on to his grandchildren. A private Funeral Service is being held out of the Presbyterian Church of Saint David, Halifax at 1pm on January 21, 2021 with the Reverend Iona MacLean officiating. A graveside service will take place at a later date. In lieu of flowers donations may be made to the First Presbyterian Church Soup Kitchen, Pictou, either by mail, PO Box 10003 Pictou, NS. B0K 1H0 or by e-transfer firstpresbyterianchurchpictou@gmail.com www.mclarenfuneral.ca