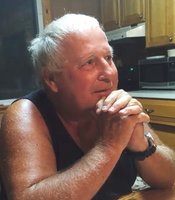 JANKOV, Alan N. Caribou Island July 16, 1942 - January 18, 2021 The death of Alan Nicholas Jankov -78, of Caribou Island, occurred peacefully at the Aberdeen Hospital Palliative Care Unit, New Glasgow on January 18th, 2021 with his soul mate Gail at his side. Alan was dedicated to many things in his lifetime - a true jack of all trades. Whether it was a 33-year teaching career (Sportsnet’s Ken Reid referred to Alan as “legendary” in Pictou), as the Pictou County basketball referee assigner (as recognized in the Legislature of Nova Scotia in 2014) for 42 years, as a founding member of the Caribou and District Fire Department, or as part of the family-owned Car-Isle berry farm for more than 40 years. However, there was nothing Alan was more dedicated to - or proud of - than his family. The son of the late Nicholas and Margaret Jankov, Alan’s longtime love for Caribou Island and the rural landscape of Nova Scotia, was a frequent topic of conversation. Alan was also known to take to the microphone and spin a yarn, a song, or parlay such wisdom as his favourite one-liner: “Love many, trust few, always paddle your own canoe”. Alan was the devoted husband of Gail (Boyce) Jankov for 59 years. The couple were always together, travelling around the Maritimes and the world to see their family, or working the family farm on Caribou Island. In fact, Alan and Gail were the epitome of kindred spirits. They were a package deal, never to be found one without the other - especially when it came to playing the “nursing home circuit”, bringing music to seniors throughout the region. Alan’s personality, sense of humour, and love for life lives on in his two daughters, Marion (Blaine) MacIsaac, and Alanna Jankov (Stephen McLean); and his grandchildren, Carlene (James) McGraw, Josette MacIsaac (Bernie Keeping), Chloe MacIsaac, Jenelle MacIsaac, Martina Sobey (Kirsty Beveridge), Martin Sobey (Elsabet LaPointe); and great-grandchild, Willow Juliette McGraw. Alan is also survived by brothers-in-law, Garry (Sharon) Boyce and Mike Boyce. He was predeceased by his sister, Mila (Jankov) Lepik; and his niece, Caroline Lepik. As per Alan’s “orders” there will be no formal visitation or funeral. Arrangements entrusted to McLaren Funeral Home, Pictou. Donations in Alan’s memory may be made to the Waterside Cemetery or to the Caribou and District Fire Department. www.mclarenfuneral.ca Alan Jankov - husband, father, friend, educator, musician, farmer, and firefighter. “Pitter patter, let’s get at’er!”