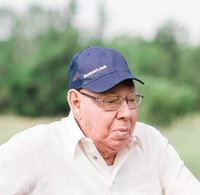 BAILLIE, Fletcher M. Welsford It is with sadness, the family of Fletcher Murray Baillie, age 87, announce his passing on March 13, 2021 in the Lillian Fraser Memorial Hospital, Tatamagouche. Born in Welsford, he was the son of the late George and Jessie “Dolly” Baillie. From an early age he took over the family farm. He farmed his entire life and was also employed by Stevenson’s Dairy and Scotsburn Dairy, as a milk truck driver for 37 years. Fletcher was happiest at home on the farm. He loved the land, his animals, and his tractor. When the work was done he enjoyed playing cards, old time dances, hunting, his 4 wheeler and telling a good story. Fletcher is survived by his loving wife of 60 years, Ruth (MacLean); daughters, Linda, Scotsburn; Sharon (Mike), Lunenburg; Jean (Darren), North River; grandchildren, Megan (Scott), Amanda (Tyler), Lucas, Jack and Baillie; great-grandchildren, Charlie, Olivia, Blair and Harper; sisters, Lina and Emma. He was predeceased by sister, Anna; brothers-in-law, Borden Forbes, Henry MacDonald and Freddy Langille. He will be greatly missed by his dog Buddy. The family would like to express sincere appreciation to the many health care providers with a special thanks to Dr. Bush, nurses at Lillian Fraser Memorial Hospital, VON, Grace and Cecilia for their excellent care and compassion. A public graveside service will be held 2:00 PM Tuesday in the West Branch Cemetery. Donations in Fletcher’s memory may be made to the Lillian Fraser Memorial Hospital, West Branch United Church, or a charity of your choice. Arrangements are under the direction of McLaren Funeral Home, Pictou.