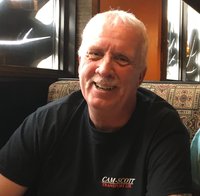 CUNNINGHAM, Ronald W Pictou/ Stellarton It is with deep sadness and heavy hearts that we announce the passing of Ronald ‘Ronnie’ Cunningham on March 12, 2021 at home. Ronnie was from Stellarton, a son of late Webster and Virginia Cunningham. He is survived by the love of his life and soul mate, Linda ‘Lou’; they enjoyed building a life together in Pictou since 1993. He has three adult children living in Oshawa Ontario, Amanda, Wendell and Tyler; and two stepsons, Brad (Melanie), Bathurst and Aaron (Danielle), Edmonton; five grandchildren, Catie, James, Nova, Logan and Taylor. He is also survived by three sisters, Paula, Stellarton; Merideth (Ray), Baddeck; Tara (Dan), Truro; and by his aunt, Patsy, Stellarton; as well as several nieces and nephews. He was predeceased by a brother, Donald in infancy. Ronnie was kind and helpful and the bonds he made with his friends meant a great deal to him, especially his plow hog buddies, Rob Mason and Roy Peters. Throughout his life he tried his hand at a number of different occupations but the call of the open road eventually drew him back in some capacity or another. He worked at Michelin Tire for a spell, the Westray Mine, and Greenbrier, before landing back with the Province of NS at Transportation and Infrastructure Renewal as a Snow Plow Operator, and oh did he love truck #2680. Then at the age of 49 Ronnie joined CEF Flight 144 Pictou County and went through Armed Forces Basic Training as a MSE Op, retiring in 2012 with the rank of Corporal. During that time his deployments included Afghanistan, Jamaica and other areas in the United States and Canada. During his time in the military Ronnie was proud to wear his medal of bravery and the Afghan Star. After retiring from the Military he returned to his first love of plowing snow and went back to Transportation & Infrastructure Works where he recently retired from TIR after 20 years of service in truck #2680, and every one of those years he took great pride being a “feather duster” operator. Ronnie was a member of the Royal Canadian Legion Branch 16, Keith Masonic Lodge #23, Stellarton Air Force Club, and an avid Montreal Canadians hockey fan. In his later years, he enjoyed reading, watching military history shows and making improvements to his property. Ronnie was a proud husband, father, papa, and a good friend who will be missed by all. Public Visitation will take place 7-9 PM Wednesday in McLaren Funeral Home, Pictou. A private service and burial will be held at a later date. Family flowers only please. Donations in his memory may be made to the The War Amps, Royal Canadian Legion Branch 16, or a charity of your choice.