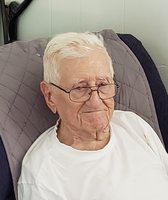 SIDDALL, Douglas H. Pictou August 13, 1930 – March 20, 2021. It is with heartfelt sadness that the family of Douglas ‘Doug’ Siddall announce his passing in the Aberdeen Hospital, New Glasgow on Saturday, March 20, 2021 in his 91st year. Born in Springhill, he was a son of the late Norma (Baker) and Hedley Siddall. Doug enjoyed a long life, which was always interesting and busy. In his younger years, he flew his own plane, experiencing a few unique landings. He had many careers throughout his life and one of his favourites was driving a school bus. He had to reluctantly retire from this job, due to ill health. Doug subsequently endured many health challenges after this but they didn’t slow him down and he stayed active for many more years. Doug is survived by his wife, Florence (Fraser); stepson, Michael (Bonnie); sons, Terry (Debbie) and Brian (Brena); daughter, Cynthia (Frank Debodt); several grandchildren, great-grandchildren and many nieces and nephews. Besides his parents, he was predeceased by sister, Margery Siddall; brothers, Arnold (Natalie) and John. A private graveside service will be held. In lieu of flowers, donations in Doug’s memory may be made to the VON, an animal shelter or a charity of your choice.