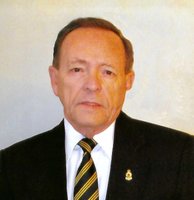 STEWART, Morris Stellarton Sherman Morris “Moe” Stewart -83, of Stellarton, passed away peacefully with daughter Rhonda by his side, April 1, 2021 in Aberdeen Hospital, New Glasgow. Born on December 9, 1937 in New Glasgow, he was a son of the late Sherman and Mary (Morris) Stewart. Morris is survived by his wife of 56 years, Donelda (Fraser); daughter, Rhonda Langille, New Glasgow; sons, Vernon (Tammy), Dieppe, New Brunswick; Fraser (Debbie), Nanaimo, British Columbia; six grandchildren, Jeremy, Kaitlyn, Cameron, Dylan, Owen and Liam; brothers, Doug (Eileen), Stephen (Anne); sisters, Pearl (Melvin), and Donelda (late Don). He was predeceased by his parents, brothers, Clarence and Henry; sister, Hazel. Moe was a cherished son, brother, father, and grandfather. He was a Scout leader, Legion member, and school bus driver. He was a master of jigsaw puzzles and hockey clocks. Moe enjoyed his Louis L’Amour books and also books about horses. A mentor to some, friend to all…Moe, I hope you are as ‘busy’ as you told us all that you were. At his request there will be no funeral service or visitation. Donations in his memory may be made to the Diabetes Association, the Heart & Stroke Foundation or the SPCA.