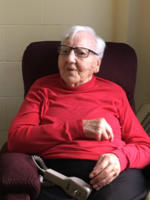 FORBES, Dolina Elizabeth - 95, of Scotsburn, passed away April 2, 2021 in Valley View Villa, Riverton. Born in Welsford she was the daughter of the late George and Jessie "Dolly" Baillie. Lina was a natural born caregiver starting in Tatamagouche in her early years. Later she helped take care of an aunt, an uncle-in law, her mother and her husband. She also looked after numerous nieces and nephews over the years. Lina loved children and was often called on to look after neighborhood kids as well as her own family. Later she acquired a new job looking after Clyde her adopted fur baby who became great company for her. Her home was her happy place where she loved to sew, garden, cook and bake, always having two freezers full. Family was everything to Lina, spending many summers helping her brother Fletcher with the haying. The rest of the summer was spent with her sister Emma's family. Packing lots of food and heading to "The Shore" was the norm every Sunday. Friends and neighbors were important too and she enjoyed all their visits over many years. Lina is survived by her son, George (Lisa), Scotsburn; grandchildren, Jason, BC; Jeffrey and Jennifer, Alberta; sister, Emma and sister-in-law, Ruth; nephews, Peter, Michael and Robbie; nieces, Nancy, Joanne, Mary Ellen, Linda, Sharon and Jean. Lina was predeceased by husband, Borden; sister, Anna; brother, Fletcher; brothers-in-law, Henry MacDonald and Freddy Langille and special niece, Heather Graham. The family would like to thank all the staff at Valley View for their excellent care over the last 3 years. A special thanks to RN’s Heather, Bonnie, Jennifer, Bliss, Cathy and all the care givers for their compassion this past week. Also a special thanks to Reggie for coming to sing to Mom, it meant a lot to her and us too! Donations in Lina's memory may be made to Valley View Villa, Bethel Presbyterian Church, or a charity of your choice. www.mclarenfuneral.ca