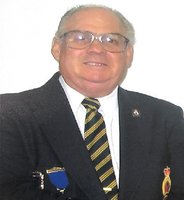 It is with great sadness that we announce the passing of Edward Joseph Burke Jr. on May 11, 2021 at age 83. He passed away peacefully at home surrounded by his loving wife and children. Eddie is survived by his wife of 55 years, Gerry (Riley); daughter, Rachael (Arnold), Pictou; sons, Peter, (Beverly), Scotsburn; Andrew (Tracey) Thorburn; Matthew, (Michelle) Westville; three grandchildren who were his world, Shauna, Eastern Passage; Riley, Pictou, Kristopher, Westville; his sister, Marjorie Clarke, Pictou; sisters-in-law, Mary Lou Milligan, Mill Cove; Jo Burke, Penticton, BC, and several nieces and nephews. Eddie graduated from Pictou Academy in 1964 after going back to school at age 25 and went on to be a successful self employed carpenter contractor for over 40 years. He served as a seaman on the C.S.S. Acadia from 1958-1962. He was a lifetime member of the Knights of Columbus Council # 8606 and a lifetime member of the Royal Canadian Legion Branch 16, Pictou. Eddie was predeceased by his parents, Edward Burke Sr. and Stella Burke (Vigneault); sisters, Margaret in infancy, Jean; brothers, Billy, Mickey, and Harold; brothers-in-law, Jim Riley and Bob Clarke. The family would like to send out a special thank you to the Aberdeen Palliative Care and VON for making his last few weeks at home comfortable, to Dr. Randy Burrill for his assistance during Eddie’s last few months and to EHS. Cremation has taken place and a service will be announced at a later date. Donations in Eddie’s memory may be made to the Heart and Stroke Foundation, Diabetes Canada or Aberdeen Palliative Care Society. www.mclarenfuneral.ca