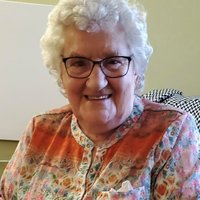 LEDBURY, Elizabeth Alah - passed away May 15, 2021 in the Shiretown Nursing Home, Pictou. She was born March 30, 1927 in Boston, Mass. to Jack (John) and Vivian (Bezanson) Robertson. She was however, raised from an early age by her loving aunt and uncle Margaret and Horace Weatherbed in Windsor, N.S. As a young girl she worked at “the mill”, Windsor Textiles Ltd., but with the advent of WWII she joined the Canadian Women’s Army Corp as soon as she was almost old enough. This was when she discovered that she was not a Canadian, but she soon took care of that and spent the rest of her life a proud Canadian and a proud veteran. It was during her time in the CWAC that she met the love of her life, Dale Ledbury (a sailor in the RCN) who she married Jan 1, 1946, and with whom she moved to Toronto, Ont., where she spent most of her adult life. She and Dale raised four children, Douglas (Linda); Timothy (deceased); Mary Brand and John. She has one grandchild, Tristan (Jennifer); one great-grandchild, Fionnah. She was predeceased by her parents, John and Vivian; as well as by the parents of her heart, Horace and Margaret; her husband, Dale, with whom she shared many adventures. She was also predeceased by her son, Tim; sisters, Myrna Resteghini; Marilyn Morris; Pauline Richie; Margaret Dalzell and Grace Woodworth. During her life in Toronto she enjoyed square dancing, bicycling, swimming, walking, travelling and she made many, many beautiful quilts that she graciously gifted to friends and family. Betty came home to NS with her family almost every summer and when Dale passed away, she and he came home “together”. She spent several years in Windsor and then came to Pictou County, NS to be close to her niece and good friend Brenda. During her time in Nova Scotia she so looked forward to regular visits from her daughter Mary. She spent her final years at the Shiretown Nursing Home where she so enjoyed being part of that community. Special thanks from the family for all of their kindness. She had a strong faith and was active in church life as long as she was able. A veteran, she was a member of the Royal Canadian Legion and never missed a Remembrance Day Ceremony, even donating a beautiful Legion Poppy Remembrance quilt, which hangs in the Windsor Legion Hall. Her dry wit and little smirk will be missed by all, but maybe now someone else will get a turn to win at Bingo. A private graveside service will be held at a later date in St. John the Evangelist Cemetery, Windsor NS. Donations in her memory may be made to the Royal Canadian Legion or St. John the Evangelist Catholic Church, Windsor NS. www.mclarenfuneral.ca