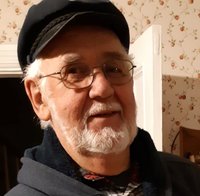 LANGILLE, Carl Joseph Lyons Brook September 29, 1940 - May 21, 2021. Blessed with his presence for 80 years, Carl Joseph Langille of Lyons Brook passed away peacefully on Friday, May 21, knowing he was loved by all of those whose lives he touched in such meaningful ways. We will now treasure each and every memory we carry forward. Born in Thorburn, Carl was the eldest child of the late Ownie and Annie (Forsyth) Langille of River John. Prior to moving to the Toronto area in 1965, Carl worked with Nova Scotia’s Department of Highways, during which time he enjoyed travelling around the province for various assignments. This would explain his unique gift of never finding himself lost! When he moved to Ontario, Carl worked for Ford Motor Company, before returning with his family to Pictou County in 1974, when he began his career with Michelin Tire Co. He retired in 1995. Carl was multi-talented and industrious; his son Shawn credits him for being the reason he never knew mechanics, carpenters, or other tradesmen existed growing up. A leisurely retirement didn’t suit Carl and he soon found himself alongside his son James, building Plum Crazy as part of a team in the BFG Off Road Racing circuit. Many hours were spent travelling to events and reconstructing the triumphs or failures of each race. Meanwhile he would worry that Shawn might push his latest toy, be it sport bike or “floating cottage,” beyond human limitations. Carl continued working various small jobs, one of which suited his experience and gift for “fixing” all things mechanical. Working at Shiretown Home and Auto in Pictou became a second career; he enjoyed camaraderie with customers and staff, and bringing smiles to many as he talked shop with them. Rarely did he return home from work without a funny story or juicy bit of gossip! Throughout his life Carl was involved in sports, participating in everything from snowmobiling with his sons and friends, to coaching his boys in tug of war, and even competing himself. Carl was known to pick up a hockey stick, likely sparking his love for the Montreal Canadians, and at one time could be found both on the baseball field as well as behind home plate as an umpire. An avid curler and junior curling coach, he competed at and volunteered his time and talents with the New Caledonian Curling Club. There, over many years, he spent countless hours ensuring the ice was up to his high standards, and blaming the weather when it wasn’t. When curling weather came to an end, you could often find Carl out on his motorcycle, yet another passion he truly enjoyed. Carl selflessly gave his time to help others, and in recent years he spent many evenings visiting with residents of the Sutherland Harris Memorial Hospital Veterans Unit, where his mother-in-law, Jean resides. Carl befriended many veterans there while playing 45s, volunteering for outings, and taking time to sit and chat with residents. He created meaningful bonds with both residents and staff, who have expressed gratitude for his kindness, generosity, and humor. Along with his parents, welcoming Carl as he begins his next journey are his late brothers, Billy and Larry; sister, Barbara MacKenzie; brother-in-law, Stanley Holt; nephew, Evan; and his father-in-law, Herbert (Skipper) Fraser. He is survived by his loving wife, Robin, with whom he loved to stroll the Pictou waterfront on Friday nights, eating ice cream or fish and chips. He also leaves behind children, James (Heather), Shawn (Candi) and their mother, Marlene; stepdaughter, Amanda (Mike) who thought of him as Dad from day one; his stepson, JB who lovingly referred to him as “Captain,”; and his mother-in-law, Jean Fraser. He is also survived by his grandchildren, Amy, Amanda (Jimmy), Patrick, Olivia and Jesse, Lucas and Hannah; as well as his great-grandchildren, Carly, Adam, Ella, and June, all of whom loved Grampie (Bampie) with all of their hearts. Carl is also survived by his sister, Jean Holt; sisters-in-law, Nancy Langille, Beth Langille, Patsy Fraser (Fred); brothers-in-law, Clyde MacKenzie (Lorraine), Danny Fraser (Juanita), Sonny Fraser (Tana); special aunt, Margaret Robson, as well as many loving nieces and nephews. Last, but certainly not least, Carl leaves behind his special little furry napping buddy, Missy, who was the first to say good morning and the last to say good night to her Papa, we’re sure she will keep your spot warm on the couch. No matter where life took Carl, River John was always home, and will be eternally as his final resting place. We ask there be family flowers only please and to honour Carl, we suggest lending a helping hand to someone in need, as he often did, or making a donation to a charity close to your heart in his memory. When it is safe to do so we will invite you to join us in a celebration of Carl’s life, as he holds a very special place in so many of our hearts. For now, we encourage you to say your farewell to Carl in your own special way, and please remember to say it loud he’s left his hearing aids at home. www.mclarenfuneral.ca In life we loved you dearly, In death we love you still; In our hearts you hold a place, No one else will ever fill.