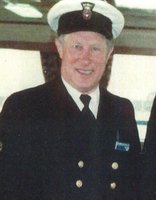 HART, William Henry “Bill” Pictou It is with great sadness that the family announce the passing of Bill Hart, on July 27, 2021 in the Aberdeen Hospital, New Glasgow. He was a son of the late Alan and Lidia Hart. Born on Fogo Island, Newfoundland, Bill left home early in his life and joined the Bedford Institute of Oceanography. He spent 17 years aboard the survey ship Acadia before settling in Pictou. In1967 he joined Northumberland Ferries where he worked for 25 years retiring in 1989. Bill loved to fish trout, hunt and play golf with his buddies from the ferries. He was predeceased by his daughter, Karen; and his brother, Martin. Surviving are children, Sandy, Susan (Ron), Debbie (Maurice), and Robin; brothers, Martin, Maxwell and Len; sisters, Ivy, Pauline, Myrtle, Mary Alice and Stella. He was grandfather to 10 grandchildren and 10 great grandchildren. Cremation has taken place and as per his wishes, no service will be held. Donations in his memory may be made to the New Horizons Club.