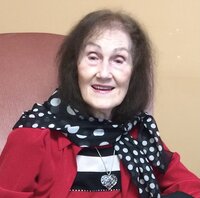 BUCKLEY, Maisie E. Welsford It is with sadness that we announce the passing of Maisie (Joudrey) Buckley in her 90th year on August 23, 2021 at the Valley View Villa, Riverton. She was predeceased by her husband, Frederick ‘Fred’, as well as her three children, Deborah, Barry and Randy. She was also predeceased by brothers, Willis, Rennie; and sister, Muriel. She is survived by several nieces and nephews. Maisie was born on July 27, 1932 in River John, to Dewey and Eunice (Studivan) Joudrey. She spent most of her life in the Toronto area and had a successful career owning and operating a modeling agency. She moved back to the family farm in Welsford near River John in 2014; residing there for close to 5 years with her son Randy. Special thanks are extended to many friends and neighbors for the assistance they gave to Randy and Maisie on the farm. Sincere appreciation is also extended to the second floor staff at Valley View Villa for their wonderful care and compassion. Heartfelt thanks to Emma Lee MacDonald as well as Dewey & Diane MacDonald for many hours devoted to Maisie in the days before her passing. Arrangements entrusted to McLaren Funeral Service, Pictou. Cremation has taken place and a graveside service will be held at 2PM on Thursday October 7th in Tatamagouche Mountain Cemetery. www.mclarenfuneral.ca