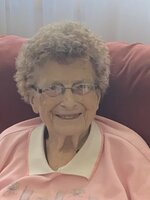 MORROW, L. Alice Pictou MORROW, Laura Alice, of Pictou passed away July 7, 2022 in the Aberdeen Hospital, New Glasgow. Born September 5, 1926 as Laura Alice McKean, best known as Alice Morrow. She lived a full and interesting life in her 95 years. She was a successful woman and when she spoke about her life, you realized it wasn’t always easy but she has always been self disciplined, steady to course and capable for a small woman! In most recent years she hated not remembering and struggling, still being frightfully independent until the end. She laughed that her zodiac sign was a tiger and that she was. She even drove her own Jeep until she was 94; imagine, she didn’t want to stop then. Born in Pictou, to parents Arthur and Helen McKean, Alice liked climbing trees more than learning how to be a lady, but a lady she became. She didn’t like school and school work, just too many other interesting things going on. But she learned and managed her life very effectively. Alice had her first son, Graham in New Glasgow while living in Pictou, then moved with her husband Fraser Wade to Moose Jaw, Saskatchewan then to Peterborough, Ontario, where she had her second son, Grant. Moving for work opportunities they went to Montreal and Medicine Hat. She later relocated once again with her second husband, Herb Morrow, to Victoria where she had her third son, Paul, stopping in Nanaimo before returning back to Pictou. She worked in the flower shop in Pictou and purchased her own home. With her long time friend, Gerry Wong she learned to dance and got her driver’s license once back in Pictou. Alice was well travelled, always dressed nice, and looked after what needed to be done. Alice was clever, with great attention to detail; she could name every flower, name every bird and could even talk politics. Alice fiercely loved her boys, their families and her grandchildren, often lamenting they were so far away and didn’t see nearly as much of them as she would have liked. Her quick wit and wisdom would have entertained them for hours. She is survived by her son, Graham (Pamela); their daughters, Nicole; her children, Kennedy and Brooklyn; Lori and her children, Michaela, Chelsea, Thomas and Zachary; 10 great-grandchildren; Paul Morrow (Debbie); their children, Curtis; his children, Wyatt and Mason; Carla (Dan). She was predeceased by her husband, Fraser Wade; second husband, Herb Morrow; brother, Arnold (Fran) and son, Grant. A special thank you to all the staff at the Aberdeen Hospital for their care. A private family graveside service will be held in St. James Cemetery. In lieu of flowers donation may be made in Alice’s memory to the Alzheimer’s society.