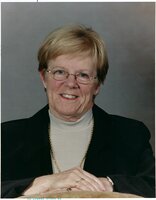 FALCONER, Ann E. Toney River / Pictou Ann Elizabeth (Wilkins) Falconer – 78, passed away peacefully July 16, 2022 at the Maritime Odd Fellows Home, Pictou. Born on December 10, 1943, Ann was the oldest daughter of the late George and Alice (Brown) Wilkins. She was raised in River John but moved to Toney River when she married her hop polka/step dance partner, John ‘Mackie’ Falconer. Ann was a stay at home mom when their girls were younger. In the summer months Ann worked at the Northumberland Lodges in Toney River. She had a lot of fond memories from those days. In the late 70’s Ann went to work at the Edward Mortimer Place which later became the Shiretown Nursing Home, Pictou. Ann completed her PCW course and found her calling working with the elderly. During her working career Ann was very fortunate to have made lasting friendships with her co-workers. During 1996 Ann took time off work to care for her husband Mackie until his passing. When Ann was in her late thirty’s she was diagnosed with Parkinson’s. She tried to continue work but it became more difficult. In 1998 Ann was selected to have a procedure called deep brain stimulation (DBS). This gave her a second chance at life. Ann was always proud to say she was the first woman in Atlantic Canada to receive this surgery. When Ann would go to Halifax for her check up appointments she would always get a kick out of the large floor to ceiling poster on the wall, of her and her Neurosurgeon Dr. Mendez. Ann and her family will always be grateful to all the health care professionals in Halifax who treated her with compassion, respect and care over the many years. Ann was in a support group for Parkinson Society, Maritime Region, and participated in many of the Super Walks until her health made it difficult. She loved to bowl, go for walks, and skate when her mobility was good. Ann enjoyed family get-togethers and spending time with her close friends. She will be remembered for her immaculate house keeping (ask her daughters), her cooking/baking (the favorites: apple pie, biscuits, homemade donuts and lobster sandwiches that no one could ever replicate). Ann was a member of the St. David’s Presbyterian Church, Toney River. Ann is survived by her daughters, Bevereley (Paul) Heighton, Kathy (Tom) Swaine; granddaughters, Allison (Billy), Nicole (Peter); brother, Daniel (Joanne); nieces, nephews and cousins; dear friends, Doris, Marlene and Siepe. Besides her parents, Ann was predeceased by her sister, Judy; niece, Melinda; and her mother and father–in law, Hazel and Wilfred Falconer. Special thank you to the staff at the Maritime Odd Fellows Home for the loving care they provided for Ann. Thank you to her close friends who were always there for her over the many years. As Ann’s wish, there will be no visitation and a private family graveside service will be held. Donations in her memory may be made to the River Bank Cemetery, Parkinson Society Maritime Region, or a charity of your choice. www.mclarenfuneral.ca