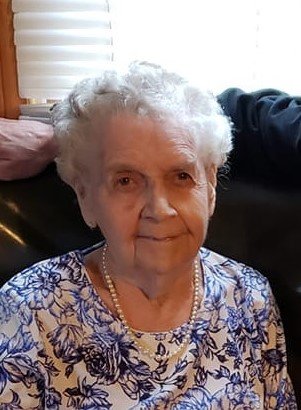 MacMillan, Helen Lorraine – 92 of Pictou Island passed away peacefully, at her beloved home on September 19, 2019.  Lorraine was a daughter of the late William & Lena (MacCallum) MacDonald.  As a young woman, Lorraine utilized her culinary skills to serve the local fishermen in her capacity as cook at the Pictou Island Cook House (a job she loved).  Lorraine served her community in various capacities, Sunday school teacher and as a member of the Auxiliary and church choir.  She loved knitting, quilting and mat hooking.  In recent years she enjoyed her audio books and weekly card games while wintering with the people she loved in her isolated community.  Lorraine lost her sight at the age of 38 due to a degenerative disease; but, she never lost her passion for life or her love of people.  Lorraine possessed an innate ability to connect with others and develop deep, meaningful relationships with a plethora of people.  In the summer months, Lorraine’s house had a virtual revolving door as people traveled to the island just to spend time in her presence.  Visiting recording artists, Valdy, Dave Gunning and Lenny Gallant were but a few of the people who made sure their visit included time with the island matriarch.  This, of course, also afforded her a private concert and a photo op.  A portion of what drew people to Lorraine was her extraordinary memory and knowledge of the island on which she spent her entire life.  She regaled countless people until the end with stories about the ways and wiles of island living intertwined with detailed historical facts.  She is survived by her only son, Billy, also of Pictou Island.  She leaves behind nephews, Victor, Travis, Cameron (Cec), Johnathon, Aaron (MaryAnne) MacDonald and Elwood (Joan) Rankin; nieces, Terri (Skippy) Fleury, Janet (Jay) Baillie and Heather MacDonald.  She is also survived by sister-in-law, Margaret MacMillan and special cousin, Shirley Bandurchin.  Lorraine was predeceased by her husband Arnold; brother, Cameron; and sister, Janet.  Visitation will be from 6-9 PM on Saturday in McLaren Funeral Home, Pictou.  Funeral will be at 1 PM on the following Saturday September 28 in the Pictou Island church with Rev. Michael Henderson officiating.  Burial will be in the Pictou Island Cemetery. Family flowers only. Donations in her memory may be made to the Pictou Island Church or the Pictou Island Heritage Society.  www.mclarenfuneral.ca

“To live in hearts we leave behind is not to die."

Reception to follow the burial in the Pictou Island Community Centre.