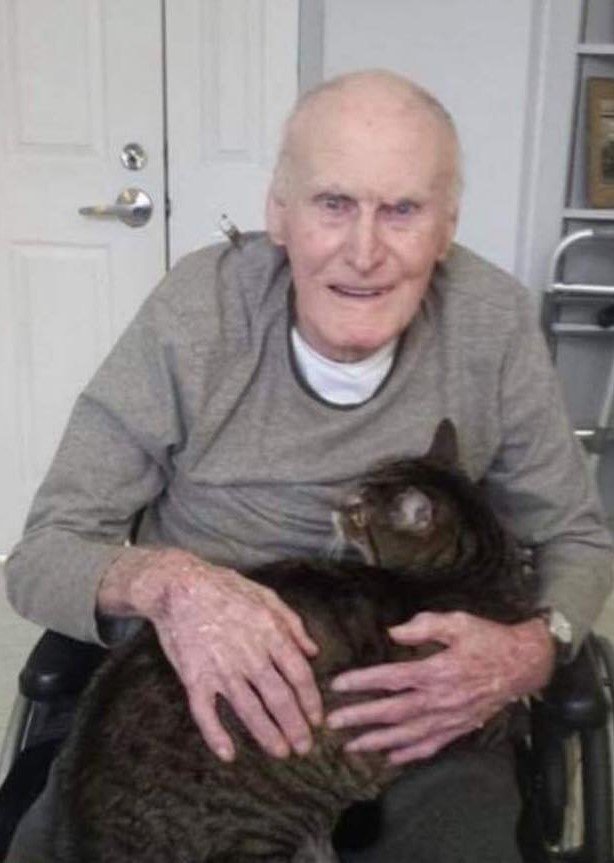 TAKER, Frank Percy  -96, lovingly known as “Uncle Frank”, passed away peacefully at the Northumberland Veteran’s Unit, Pictou.  A son of the late Frank Taker and Marion (McArthur) Taker Hayne, he is survived by his sister, Kathleen, Pictou; and brother, Cyril (Rose), Antigonish; along with many nieces and nephews.  He is also survived by his special cat, Dingbat, who now resides with his loving caregiver and niece, Karin.  Frank was predeceased by sisters, Eleanor, Joyce, Louise; and brother, James.  Frank enlisted to serve his country in World War II, covering countries from North Africa, to Belgium.  Upon his return home, he was a mail carrier in Ontario and received many yearly plaques for never missing a day of work.  Having spent a number of years vacationing and camping with family, Frank moved to Pictou County to spend his retirement years with them.  We would like to thank the V.O.N who helped Frank stay in his home until he was 95.  His last year and a half, he was lovingly cared for at the Veteran’s Unit in Pictou.  We thank you for the care and kindness you gave our Uncle and especially Dennis, who spends so much time entertaining all the veterans.  A generous, loving, kind, Christian man who marched to his own drum.  Private family burial will take place in Seaview Cemetery.  Donations in his memory may be made to CARMA or the SPCA.