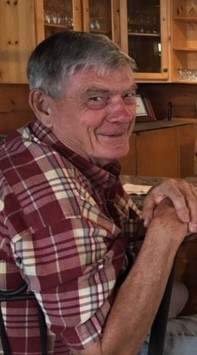 The passing of Bryan Freeman of Pictou, NS occurred on September 7, 2019 at the Aberdeen Hospital in the Palliative Care Unit, with his wife Margie (MacPherson) Freeman by his side. He was predeceased by his parents, Gertrude (Reccord) Freeman and William Freeman; brothers, Paul (Gerine) and George (Caroline); sisters, Beatrice Boomhower (Leonard), Sybil and Ivy. He is  survived by his wife, Margie (MacPherson) Freeman; his sister, Mary (Joe) Boomhower, Stanbridge East, Montreal; his daughter, Lara Staecker (Mark) London, Ontario; his son, Kenneth Freeman, Melbourne, Australia; mother of his children, Mildred Hoffe; and his two grandchildren, Kaitlyn and Jacob. Bryan grew up in Millertown, NL, and was proud of his Newfoundland heritage where he enjoyed the outdoors; swimming, fishing and snaring rabbits. He had a variety of interesting careers over his lifetime. He joined the Royal Canadian Air Force at a young age, was Chief Engineer on the hovercraft in Montreal, and worked for Michelin Tire. He was also self-employed as an owner and licensed mechanic of a service station, a Real Estate Sales Representative, an owner/operator of a convenience store/restaurant, and finished his working career as a Home Inspector for twenty years. He was also an excellent carpenter renovating many homes including a 2 storey 100+ year old house overlooking Pictou Harbour, for he and his wife. Bryan loved playing hockey with the Pictou Old Puckers, and he enjoyed many fishing and hockey trips with his buddies. He liked to cook for family and friends, especially Newfoundland dishes he grew up with. He also enjoyed travelling and spending time with his wife and their families and friends. In his recent years of travelling, he fell in love with The Republic of Panama where he made many great and lasting friendships.   Bryan’s family would like to express their gratitude for the wonderful care he received from Dr. Snow and her nurse Jessica at the Nova Scotia Cancer Centre in Halifax, the Chemotherapy Unit and the Palliative Care Unit at the Aberdeen Hospital in New Glasgow; as well as the VON nurses. As per his wishes, there will be no visitation or funeral as he wanted his family and friends to celebrate his life, not mourn his death. A Celebration of Life will be held at a later date. Donations in his memory may be made to the Canadian Cancer Society.